Review: THE SHOCK OF NIGHT / by Patrick W. Carr 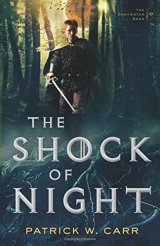 Patrick W. Carr, author of The Staff and The Sword series, presents an epic adult fantasy, rich in character development and plot twists.

In The Shock of Night, Willet Dura — the King of Bunard’s reeve — is called to investigate a brutal attack that results in the death of one man and near death of a priest. The dying priest utters a foreign word as he grabs Willet and dies. Willet is unaware that a rare gift was passed to him: the ability to see a person’s deepest thoughts, a gift thought to be extinct — one others will kill for once they discover it. Willet tries to discover the murderer’s identity and accidentally uncovers a plot putting Bunard at the center of a major conflict between good and evil.

Like Carr’s earlier books, the church (The Vigil) plays an important faction in the storyline, one that is sometimes good, sometimes corrupt. It involves gifts that are divinely given, but even traitors can infiltrate The Vigil. When people go into the Darkwater Forest, it causes significant changes, ones that might not appear until years later.

Carr’s book is filled with strong characters, and a plot with plenty of suspenseful twists. Unlike his earlier series, The Darkwater Saga is more intense — there is little hope for overcoming this darker evil. It is also harder to grab the reader’s interest in the earlier chapters, especially if one has not read the prequel, By Divine Right. There is more violence than in his earlier books but not too graphic. There is also a romantic relationship for Willet, although it is “clean.”

Carr does a good job of developing this dark world and building tension as the story unfolds. The Shock of Night answers some questions as it ends, but lays the groundwork for the second book in this series, The Shattered Vigil (The Darkwater Saga, #2), published in 2016.

Want to read more Patrick Carr books? Check out my review of his earlier series, The Staff and Sword: CAST OF STONES, A HERO’S LOT, and A DRAW OF KINGS.

A prequel novella — BY DIVINE RIGHT — is available for FREE on AMAZON for your Kindle and Barnes and Noble for your nook (as of yesterday, December  6, 2015).

Disclaimer: Book reviews are my opinion of books I either purchased or received free of cost from the publisher in exchange for a honest review.

In conjunction with the CSFF Blog Tour, I received a free copy of this book from the publisher.

6 responses to “Review: THE SHOCK OF NIGHT / by Patrick W. Carr”