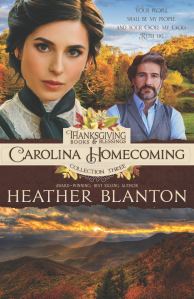 In Carolina Homecoming, widowed Noemie decides to return to her small South Carolina hometown following the death of her son. Her son’s widow Ruth accompanies her. When they get to her farm in Walhalla, they find the farmhouse deserted and fallen into disrepair — as well as no sign of the caretaker she left in charge years earlier. Apparently he died a few years earlier, and a cousin claimed it as his own.

But a distant relative, widower Montgomery Boaze — an older and wealthy farmer — helps them get the ranch back in running order, and he appoints himself their protector. Together, they face the battle over her land which had been left unattended while Noemie lived up North.

Blanton is an excellent storyteller, providing good character development and descriptive narratives, allowing the reader to picture themselves in the midst of the story. Known for her inspirational Westerns, Blanton tells an engaging story in this rendition of the familiar biblical story. She even adds a brief introduction of the biblical story of Ruth for readers who may be unfamiliar with it. Needless to say, the faith element is strong and evident, at the same time, it is not preachy.

Ruth was not just a Northern girl (avoiding the usual North vs. South storyline), she was an Irish immigrant — and that was a welcome twist. The relationship between Ruth and Montgomery is May-December romance (he is about fifteen years older)  and that was delightful to watch unfold. . This book would be appropriate for older teens as well as adult readers.

Recommended for adult collections in school and public libraries, as well as Western fans, and fans of second chance clean romances.

Disclaimer: Book reviews are my honest opinion of books I either purchased or received free of cost from the publishers, publicists, and/or authors. I am not required to write reviews, nor to even post positive reviews.

Comments Off on Review: CAROLINA HOMECOMING, / by Heather Blanton